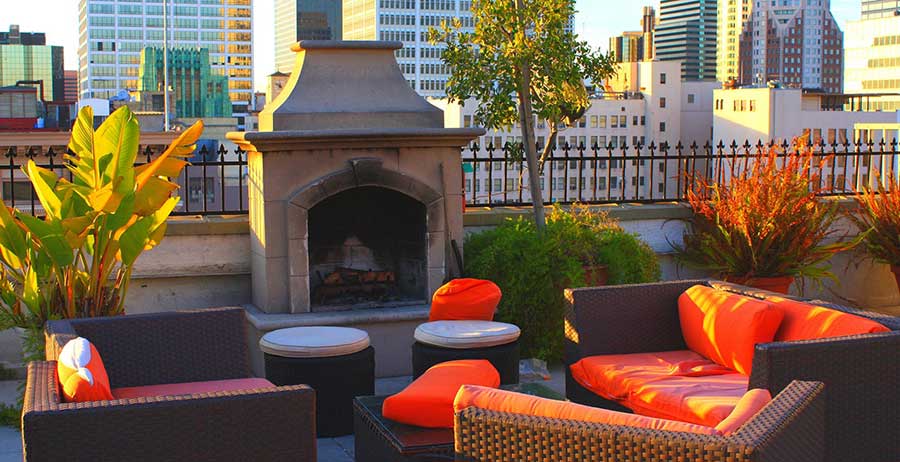 Conversions of historic office buildings into condos, lofts, and exclusive penthouses plus a rash of new residential construction have transformed City Close neighborhoods into vibrant communities with a significant population. Prosperity seems assured as more and more suburbanites trade tedious commutes for urban convenience. What better way to start your day than to leave the car at home and stroll to work?

Downtown is bordered by Larimer Street/Park Avenue to the North, Colfax Avenue to the South, Broadway to the East, and Lawrence Street/Speer Boulevard to the West.

The residences in Downtown include contemporary condos and distinctive water view lofts. Just around the corner from these condominiums you can also find turn-of- the-century, elegant homes sitting on perfectly landscaped city streets. For anyone who dreams of a true urban lifestyle, the allure of this pedestrian-friendly district grows ever more compelling as new hotels, lofts, entertainment venues, restaurants, and shops continue to spring up between Lincoln and Larimer Streets.
The futuristic Hamilton Wing of the Denver Art Museum, a redesigned Skyline Park, expanded Colorado Convention Center, and stunning Hyatt Convention Center Hotel have recently joined the already impressive array of downtown attractions.

Shopping and upscale restaurants abound along the Mall anchored by the newly renovated Tabor Center shops and restaurants (including an ESPN Zone), located next to the historic D&F Tower. Denver Pavilions hosts a plethora of trendy shops and eateries, Barnes and Noble, and a fifteen-screen United Artists Multiplex featuring stadium seating. In addition to a Virgin Megastore, Maggiano’s Little Italy, Corner Bakery, Hard Rock Cafe, and Nike Superstore, look for outdoor concerts and festivals throughout the year. Mini-districts such as Larimer Square, Writer’s Square, and Sakura Square, offer distinctly different takes on the urban experience.

The LoDo (Lower Downtown) Historic District was formed in 1988 in an effort to stop the demolition of past decades. 127 historic structures are now preserved and a zoning ordinance restricts building heights and mandates design guidelines. The 23 square block area is the original city of Denver and houses some of the city’s most famous sites, including Coors Field (home of the Rockies), Historic Larimer Square, and Union Station (which just experienced a massive redevelopment).

The historic lofts, charming townhomes, and elegant high rises of LoDo offer an idyllic urban lifestyle, which includes dining at charming area bistros and the option to walk, bike, or ride the bus or Light Rail in lieu of driving. In pedestrian-friendly LoDo and the adjacent Platte Valley Greenway, adopting a car-free lifestyle is easy and likely to improve health, increase peace of mind, and help protect the environment. Enjoy the colorful pageantry that only LoDo can offer. You’ll never lack for stimulating things to do and see.

LoDo streets bustle night and day with shoppers, nightclub hoppers, sports’ fans, business people, and tourists. The landscaped paths along the South Platte and Cherry Creek provide walkers, joggers, and cyclists with safe, picturesque access to one of the most extensive urban trail systems in the nation.

Larimer Square’s delightful historic buildings boast upscale boutiques, fine restaurants, nightclubs, and the ever-popular Market, a New York style deli touted as the “first espresso bar between New York and Los Angeles,” when it opened more than 20 years ago. Shopping and dining likewise abound at adjacent Writer Square and the Tabor Center, which host ESPN Zone, Cheesecake Factory, the Palm at the Weston Hotel, an upscale food court, and a host of classy boutiques.

Rail lines, buses, and the free 16th Street Mall Shuttle connect LoDo residents to downtown, DIA, and the Denver Tech Center. Light Rail and commuter rail lines to DIA, Boulder, Golden, and Park Meadows Mall are in the works. As time goes by, the allure of LoDo grows ever stronger and it continues to earn national plaudits as one the country’s premier urban communities.

No neighborhood captures the spirit of downtown living like Riverfront Park. Set against Denver’s skyline it’s unique in that it’s not just a set of apartments or condos. It’s a master-planned residential community smack dab in the heart of downtown. Living here means you can enjoy all the conveniences of a vibrant downtown with the sense of place you can’t often find in the middle of the city.

Riverfront’s buildings and brownstones are architecturally stunning, and while most are high end, dwellings can be had for all budgets. And the views! The spectacular Millenium Bridge links Riverfront Park to all conveniences and nightlife of LoDo. But with its own coffee shops, excellent restaurants and amenities on site and neighboring Platte Street, residents need not venture far.

Not far at all – especially with 80-acre Commons Park shining as the neighborhood’s crown jewel and front yard. A 40-mile bike and running path winds through the Park and the convergence of the Cherry Creek and South Platte River is kayaker heaven. Dogs seem to outnumber people, and even Skateboarders have their own digs at Denver Skate Park.

Riverfront Park is clean, sunny and its amazing amount of open space makes it feel energized, exciting and different from any other downtown neighborhood.

Lower Highlands, or LoHi has a very eclectic mix of exciting modern architecture set alongside historic Victorians, bungalow-style homes and brownstones. The exciting homes in LoHi appeal to a broad spectrum of buyers, from young professionals to active retirees.

An emerging neighborhood experiencing revitalization, LoHi is enjoyed by young singles, urban professionals and growing families who enjoy the diversity and proximity to downtown. LoHi, is one of the trendiest parts of Denver and a cool place for beating midwinter doldrums with a shot of cosmopolitan buzz. There are “happening” restaurants, a new contemporary art museum, and the dramatic, triple-ribbed Highlands Bridge which makes it easy to reach LoHi across I-25.

LoHi has experienced amazing growth and changes in the past few years with trendy bars and quaint boutiques. Restaurants serve up everything from Mexican and Caribbean cuisine, to seafood and sushi. You’ll find martini bars, art galleries, live music venues, plus ample parking.

Capitol Hill is bordered by Colfax Avenue to the North, 7th Avenue to the South, Downing Street to the East, and Broadway to the West.

Capitol Hill is located just southeast of Denver’s central business district near the Civic Center and the Colorado State Capitol. The neighborhood is characterized by some of the oldest single-family homes in the city and was once the home of Denver’s elite, and saw the origination of American Foursquare architecture.

Today, Capitol Hill consists of historic mansions, apartment and condo buildings, with office development primarily concentrated in the northwest portion of the neighborhood with small professional offices located throughout the neighborhood. It is one of the most cosmopolitan neighborhoods in Denver and a well-known haven for artists and bohemians.

Capitol Hill is one of the most diverse and eclectic neighborhoods in Denver. There are a large number of restaurants ranging from Cuban to Greek, plus vibrant nightlife with jazz and blues clubs. Hotels are also in abundance along with historic and fine art museums. Residents of Capitol Hill enjoy excellent shopping with a wide variety of retail stores and charming boutiques, in addition to vibrant brew pubs and piano bars.

There are two concert venues, multiple parks, and a special ambiance that makes the neighborhood appealing to a wide range of home buyers. Capitol Hill offers a rare affordability in housing options compared to other Denver neighborhoods, but parking is at a premium. Some redevelopment in the area is making it more pedestrian- friendly.

This thriving area has become the place to be for young urbanites wanting to own homes close to downtown. Its popularity and rapid growth has meant a boom in single-family home sales, new buildings and the overall vibrancy of the neighborhood. Its mix of historic homes with new condo and loft developments has continually made it one of the hottest spots in the Denver real estate market. Neighboring locales, such as Berkeley Park, enjoy a similar trend adding to Highland’s its appeal.

Set up on a hill overlooking downtown Denver, complemented by hilly, tree-lined streets and an eclectic mix of housing, the aptly-named Highland neighborhood sits above Auraria and downtown Denver in peaceful detachment. Neighborhood residents are fortunate in that they have the unique feeling of living far away from the city’s hubbub while still being only a quick bike or scooter ride from the heart of downtown.

The recent redevelopment of the Central Platte Valley – along with the construction of several bridges – including Millennium Bridge, Platte River Bridge and the Highland Bridge over I-25 – helped Highland both in terms of proximity and easy access to downtown, as well as its current prosperity.

Part of Highland’s charm lies in its unique commercial districts with locally owned specialty retailers and restaurants along 32nd Avenue between Tejon and Clay streets, LoHi Marketplace at 16th and Boulder, Upper 15th Street and the Navajo Arts District and in the Lower Highland area situated around 32nd Avenue and Zuni Street.