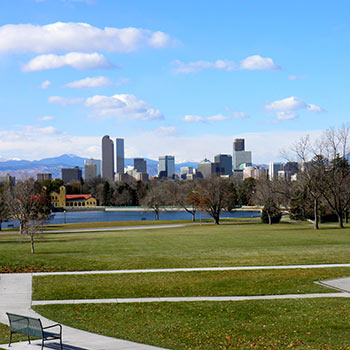 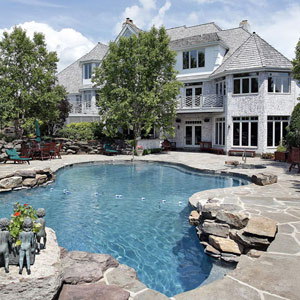 Within the neighborhoods east of Downtown Denver are found some of the most historic, grand, and most expensive residences in the City. Also within the area are some of the best of the municipal parks, including City Park, Cheesman Park, and Cranmer Park, and Great Lawn Park.

The Cheesman Park neighborhood is one of the oldest in Denver. With the completion of its namesake park, the neighborhood was mostly developed with large mansions for some of the city’s wealthiest people. Since the 1930s however, the neighborhood has become denser with a construction of numerous hi-rise apartment buildings and condominiums. However, the neighborhood contains not only modern, dense residential units; it also contains three of Denver’s residential historic districts: Wyman’s, Morgan’s Addition, and Humboldt Island. These historic districts now preserve homes of a wide variety of architectural styles, from the late 19th century through the early 20th century. Also located in Cheesman Park are Congress Park and the Denver Botanic Gardens.

Country Club is bordered by 8th Avenue to the North, Alameda Avenue to the South, University Boulevard to the East, and Downing Street to the West.

Nowhere else in Denver does the canopy of 100-year-old American elms spread quite so magnificently over tiled rooftops and broad parkways as it does in Country Club. One of city’s most cherished neighborhoods, Country Club is also among the most scenic. Stately Spanish gateways and lush gardens stand sentry-like at the entrances to the elegant community as if to protect the rural ambiance of its quiet streets. The gates, parkways, and many of the area’s homes were designed by architects William and Arthur Fisher, renowned for their refined Mediterranean designs.

On Country Club’s eastern edge, Park Lane Square, reminiscent of the English countryside with charming curved streets and expansive lawns uninterrupted by alleys or sidewalks, is entered through picturesque English-style gates fashioned from brick. Originally planned as a single country estate, this elegant enclave boasts some of the grandest estate homes in the city. Grandest of all is the Tudor Revival Cast (Reed Mansion), an area icon with a steeply pitched, multi-gabled, slate roof, soaring stone chimneys, bronze window frames, and elaborate Indiana limestone trim and brickwork.

Shielded from busier districts by Speer Boulevard Parkway and Cherry Creek Bike Path and the Seventh Avenue and Alamo Placitas historic districts, Country Club is nevertheless just blocks from the heart of the Cherry Creek Shopping district and only minutes from Downtown.

Residences found in Cherry Creek include shady residential streets lined by cozy bungalows and new, upscale single-family homes, along with hi-rise condominiums. Cherry Creek is a dense, urban development a short walk from world-class dining, shopping and art galleries. Residents find easy access to the downtown business district, either by car or bike.

Cherry Creek is a culinary delight. The neighborhood’s reputation for fine dining has increased in recent years as some of its chefs have gained national recognition. Bistros and coffee shops buzz with activity. Cherry Creek is also a hotbed of physical activity. The 22-mile Cherry Creek bike path connects downtown and Cherry Creek State Park, creating the perfect route for a morning run or an afternoon ride.

Hilltop is bordered by 6th Avenue to the North, Alameda Parkway to the South, Holly Street to the East, and Colorado Boulevard to the West.

The Mediterranean-Renaissance Cranmer Mansion (a designated Historic Landmark) designed by the renowned Jules Jacques Benedict, is typical of the magnificent homes, both old and new, that grace much of Hilltop. English Tudors and classic 50s-style ranches share blocks with multilevel Contemporaries, International-style homes, as well as a large number of recently constructed homes.

Hilltop residents have easy access the Highline Canal, a popular recreation trail frequented by dog owners, joggers, and bicyclists, which winds its way more than 84 miles south and east of Denver.

Cranmer Park offers a spectacular panorama of the Front Range Mountains from a flagstone promenade engraved with the names and altitudes of prominent peaks. In addition to Cranmer, Burns, and Robinson Parks lie within Hilltop, while a half-dozen others, including Crestmoor, Pulaski Park and Lindsley are just blocks away.

Crestmoor is bordered by 6th Avenue to the North, Alameda/1st Avenue to the South, Monaco Parkway to the East, and Holly Street to the West.

The centerpiece of Crestmoor is the sprawling Crestmoor Park, one of Denver’s premier parks offering residents and visitors alike a number of recreational activities, including a softball field, soccer field, tennis courts, picnic areas, exercise stations and play structures.

There are a variety of shops and eateries, plus excellent access to Cherry Creek North and the Cherry Creek Shopping Center showcasing a wide variety of boutiques, salons, restaurants, and upscale department stores.

Park Hill, located on high ground east of City Park, remains one of the most coveted neighborhoods in Denver. Shaded by stately American Elms, Park Hill’s exquisite thoroughfares, 17th Avenue, Forest, and Montview parkways, are among the most beautiful in the city. Homes in Park Hill include charming bungalows, Four Squares, and post-World War II Cape Cods, along with homes as stunning as anything you’ll find the Country Club area.

Today’s active families will find the charms of this vibrant community to be as compelling as ever. Park Hill’s international mix of families enjoy short strolls to some of Denver’s finest cultural attractions and shopping. On the west is lake-graced City Park, home to the highly regarded Museum of Nature and Science, Gates Planetarium, IMAX Theatre, Denver Zoo, and City Park Municipal Golf Course. Behind the museum, the “H-2-Odyssey” fountain delights children each summer with its sprightly array of water jets shooting geyser-like sprays high overhead. From here, the oft-photographed view of the Front Range and downtown skyscrapers is among the grandest in the city. Also in summer, the park bandstand hosts the free City Park Jazz concert series.

In 1991, a group of developers began the process of giving new life to the former Lowry Air Force Base located 15 minutes east of downtown Denver. With a goal of avoiding the urban sprawl that blights so many new developments, the community of Lowry as we know it today was born. Lowry now offers over 4500 residences (homes, condos, lofts), two million square feet of commercial buildings and 800 acres of parks and open space.

Particularly notable from an architectural standpoint is the seamless transformation of military buildings and officers quarters into a residential neighborhood with modern amenities. The Town Center satisfies those needing Starbucks and Albertsons, and also boasts a handful of unique destination shops. Very good public and private schools call Lowry and the vicinity home. And the soccer fields are the envy of every other Denver neighborhood.

This award-winning urban in-fill project has attracted a diverse clientele. The community is located close to the culture and energy of the city but at the same time steps away from walking and biking trails, an ice arena, a baseball complex, Lowry Swim Club and Common Ground golf course.